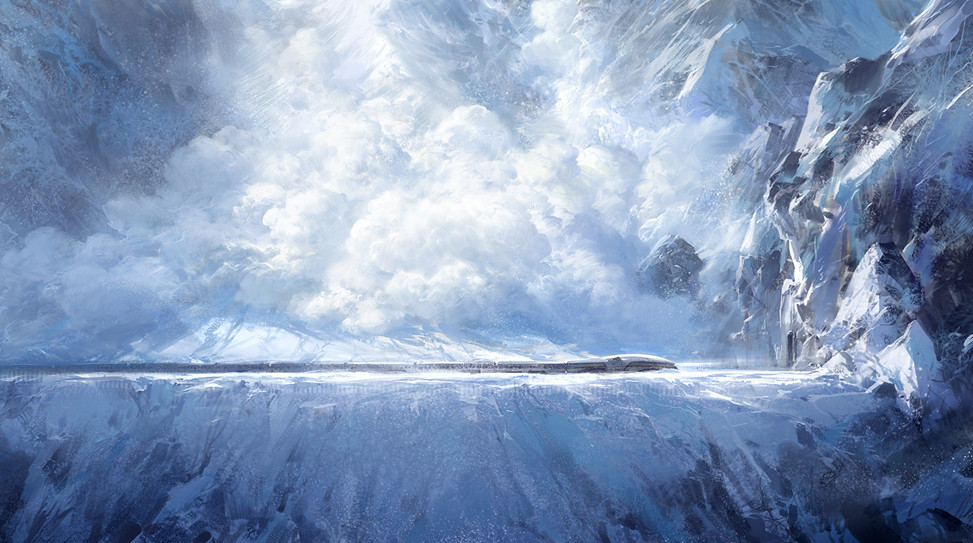 The field of empirical ecocriticism is gaining traction in graduate programs across the environmental humanities. Recently, two master’s theses have responded to the call to bridge the gap between ecocriticism and the social sciences, presenting new and insightful studies into the impact of climate fiction, both in literature and in film.

Crisis, disaster, and dystopia in environmentalist narratives by Gabrielle McPhaul-Guerrier from Central European University in Budapest reports the findings of a qualitative reception study of the critically acclaimed Snowpiercer from 2013. Directed by the Oscar-winning South Korean director, Bong Joon-ho, the film offers a cautionary tale about the environmental risk of geoengineering and – more importantly – the societal consequences of ecological crisis. Thus, the thesis examines a mainstream blockbuster that speaks to the issues of climate change to a broad audience, making it an excellent case study for examining, empirically, how real flesh-and-blood viewers experience and make sense of the increasingly popular genre of cli-fi cinema.

Theoretically, the thesis responds to several ongoing debates within the field of eco-cinema, such as the use of melodrama in environmentalist film (Ingram 2004) as well as the increasingly fraught distinction between mainstream and avant-garde ecocinema (see, for instance, Willoquet-Maricondi 2010 and Ingram 2013). What such discussions lack, however, is empirical evidence that may lend support to the varied arguments that one encounters in such discussions. In its effort to fill this gap, the thesis presents the findings from a series of focus group interviews with viewers of the film, focusing especially on the process of meaning-making and the ability of viewers to relate the fictional story to the ethical dilemmas of climate change and social inequality.

Amongst other things, the study’s tentative findings pointed to the fact the film’s depiction of crisis “generates the desire for action”, as it led the respondents of the study to contemplate their own course of action and responsibility with regards to a number of pressing ecological issues. Importantly, this is not to say that the study was able to demonstrate with any complete certainty that exposure to Joon-ho’s disaster narrative unequivocally translated into changes in behavior amongst the participants of the study. For inasmuch as the film was able to draw the viewers’ attention toward the issue of climate change and its implications for societal as a whole, such reflections, the study showed, appeared to be accompanied by an equally frequent concern about their lack of self-efficacy in light of the larger, societal structures that drive such processes. As such, what McPhaul-Guerrier’s reception study suggests is that the experiences of cli-fi viewers are not only varied and complex but also inherently ambiguous, as it brings to the foreground some of the contradictions that characterize both environmental narratives and everyday life in the context of ecological crisis. Ultimately, such ambiguity bears testimony to the continued need for more empirical research in this area, as the thesis effectively destabilizes any set-in-stone conclusions about the (in)ability of mainstream cinema to evoke social and perceptual change.

Another recent thesis that responds directly to the call of empirical ecocriticism is Nahid Al-Tehmazi’s A Reader’s Response Approach to Lydia Millet’s “Zoogoing” submitted to Linnaeus University in Växjö last year. The thesis reports the findings of a reception study of Lydia Millet’s short story Zoogoing, which was published in 2011 as part of the short story collection I’m with the Bears: Short Stories from a Damaged Planet.

A kind of fable about mass extinction and climate change, the short story tells the story of a man, T, whose trip to a zoo in the desert of Arizona initiates a series of reflections about his relationship with endangered animals and their vulnerability in an age of unprecedented ecological crisis. Drawing especially on Donna Haraway’s When Species Meet (2007), Al-Tehmazi considers the short story in terms of its representation of human-animal hierarchies and speculates about the impact Millet’s story might have on our thoughts and feelings about animal extinction and anthropogenic climate change.

Like McPhaul-Guerrier’s study of Snowpiercer, Al-Tehmazi’s thesis highlights the absence of empirical evidence that characterizes much ecocritical writing about the impact of environmental narratives. With reference to the work by scholars such as Ann Kaplan’s Climate Trauma: Foreseeing the Future in Dystopian Film and Fiction, Al-Tehmazi laments the tendency amongst ecocritics to “evaluate the reception of climate discourse based on their assumptions” and argues that doing so “leaves a gap in the study of those literary texts that is in need to be filled”. Filling this vacuum is precisely what Al-Tehmazi’s empirical study attempts to. Using Survey Sparrow, an online tool that allows researchers to collect qualitative and quantitive data from a predefined cohort, the thesis examines the reading experiences of a group of high school students from Bahrain, who were asked to complete two questionnaires (one before reading and one after) designed to flesh out the salient aspects of their reading experience and to determine whether the story had any traceable effect on their views on climate change and animal conservation.

Amongst the many interesting findings of the study, one discovery stood out as being particularly unexpected: While the story seemed to have had an impact on a significant part of the cohort’s attitude toward resolving the issue of climate change, it appeared to have had little to no effect on their attitude toward animal protection. As Al-Tehmazi writes, “although the story’s main theme revolved around animal wildlife and conservation, the participants showed no change in how much they cared about animal life. Their concern for wildlife conservation remained the same. From what can be said from the results of the survey, this animal narrative made an impact on how they thought about climate change per se, but not particularly about animals or animal conservation”.

In her attempt to explain what might have caused this curious trend, Al-Tehmazi turns to the qualitative bulk of her data in search for clues about the reader’s experience of the story, its narrative strategy and formal characteristics. By close-reading the readers’ testimonies, Al-Tehmazi speculates that the lack of description of the animals in their own right might have had an impact on the text’s inability to foster concern. Another reason might be that the distance experienced by the protagonist, who describes feeling annoyed and bored by the animals’ reluctance to interact with him, led the readers to simulate this experience, causing them to feel disconnected from – rather than in touch with – the individual animals of the story. Like McPhaul-Guerrier’s investigation of cli-fi cinema, Al-Tehmazi’s thesis thus leaves open a number of questions that require further consideration from within empirical ecocriticism: How does narrative perspective influence perceptions of human-animal continuities? What is the role of literary description in drawing readers into the life of the individual animal? And finally, as Al-Tehmazi asks in one of the final paragraphs: “[D]oes reading climate fiction alone generate as much as an impact as discussing it with others after reading?”

For the field of empirical ecocriticism, the fact that graduate students have begun to pick up the mantle and started to experiment with empirical approaches to the study of environmental narratives is encouraging. Whether one is interested in climate fiction, ecocinema, or simply environmental art in general, it is our hope that such studies may serve as advantageous and inspiring examples for other scholars – graduate or not – to follow.

The primary mission of the Empirical Ecocriticism website is to facilitate interdisciplinary scholarship by offering forums for cross-disciplinary communication.